Shark Tank India Episode 11 is in a way historic and will be remembered by everyone for a long time. The reason - an unjustified ask of 300 crore, highest ever on Shark Tank (across countries and formats) by Gopal's 56 - an ice cream brand based in Delhi. Other brands featured on the Show were ARR Coat & Farda Clothing.

Let's look at each of these brands one by one.

Based in Delhi, Gopal's 56 is an all-natural, 100% vegetarian ice-cream brand that serves pure, creamy and rich (0% oil) ice-creams through its outlets. The brand serves 56+ varieties of ice creams through its 4 outlets where food lovers can even binge on snacks, savories, shakes, etc. along with its ice cream range.

The brand's USP is in it's 100% vegan, pro-biotic ice-cream range that helps people with weight management and cholesterol control. Gopal's 56 claims to be the world's first ice-cream brand with fiber-rich ice creams. They also have an ayurvedic range of ice creams with ingredients like Ashwagandha, Tulsi, Dalchini, Brahmi, etc.

The brand was started in 1983 as a wooden handcart and today has prominent presence in the NCR region.

The brand owner - Gaurav Goyal came with an unrealistic (and historic) ask into the tank. He was expecting to raise INR 300 crore against 25% of the company.

Discussion: Did Gopal's 56 Get Funding from the Sharks at Shark Tank India

Ashneer started the discussion by asking about the education qualification of the founder.

Gaurav informed that he is a BBA graduate with a doctorate in Business Administration. He is also pursuing law now.

The sharks also asked that why his brand's focus is on health when his market - Delhi people look for taste and aren't particularly health-conscious when it comes to ice-creams.

The founder informed that they tried to add value to the mix by making 'ice-cream binging' healthier. Their focus first is on taste and sweetness but health is something they've been adding to the mix.

Aman Gupta asked about the outlets run by the brand. The founder informed that they have multiple outlets - one in Kalkaji, other at CBI headquarters, third one at Indian Air Force Supply, along with a few outlets at different embassies and schools. They've also incorporated a company in California USA with an intention to go global.

Ashneer suggested that they should focus more on Delhi NCR before thinking of going global.

Peyush said that he knew the Kalkaji market.

On enquiring about the sales of the Kalkaji outlet, the founder informed that Kalkaji outlet sales is INR 4 crore per year with an annual profit of 80 Lakh.

Namita asked about the authenticity of claims (healthy, helps with weight management) for its ice cream range. The founder informed that they have test reports from a qualified professional but he didn't disclose the identity of the professional.

After the initial round of discussions, Ashneer started the discussion around insane valuation of the company and said that the ask is hard to digest.

Anupam asked why the brand needed INR 300 crore. The founder informed that this money is needed for the long-term vision and plan of the company - setting up a manufacturing unit, marketing and investment in inventory.

On listening to this, Anupam said to the founder:

He suggested that any long-term plan or vision should be executed in phases. Adding inventory of 300 crore right now with a vision of creating a INR 5000 crore company (and business) isn't a great idea. He also said that every overnight success (that's visible on the outside) takes at least 20 years in making. So, the founder should keep this in mind and work towards it, step by step. At the moment, he cannot invest in this and got out.

The anguish towards unjustified ask was a common feeling among the sharks.

Namita commented that if the brand has global ambitions, so they should focus on backing their health claims with scientific data, reports and credible experts. She also got out of the discussion.

Ashneer too felt that the ask was too 'huge' to even give a thought. He also felt that going global isn't the right strategy for the brand. He also said that with the same brand, it would take 50+ years to sell ice-cream worth 300 crore. Wished the founder best but got out as he wasn't convinced.

Aman too said that the valuation is insane and the shark money is not a joke. He suggested the founder to focus on understanding the concept of valuation (and explained in brief.). He got out too.

Peyush didn't feel the business to be investible and got out, too.

Gopal's 56 got nothing on Shark Tank India due to an insane valuation. Everyone suggested the brand owner to respect money and wished him the best.

ARR Coat is an end-to-end wall solutions company that provide water-resistant, washable, Zero VOC, anti-crack, and effective coating for indoor and exterior walls of the home.

ARR Coat is an eco-friendly coating for walls  that can be used for decor, interiors and painting walls. An effective substitute of plastic and enamel paints, ARR Coat aims to offer a sustainable solution for the future that keeps homes cooler while looking chic.

Know more about the brand and their solution at their website

Discussion: Did ARR Coat Get Funding from the Sharks at Shark Tank India

The sharks were interested in the history (and inception) of the brand and the product.

The founder started sharing about Ekbal (who is in the tank too). He is the original inventor of the product and looks after the manufacturing of the product. He started as a helper in a factory and learned the art of painting during that time. In 2004, he became a paint applicator, moved to Dubai and learned texture and wall art.

His interest and passion in the field made him research deep for an eco-friendly paint solution. He told that he spent 9 years trying to find a solution that was chemical free as the hazardous chemicals in paints cause rashes and skin diseases.

When he couldn't find a solution, he decided to build a chemical-free product himself and came to India in 2016. His search for the right raw material took a long time and he had to even sell his wife's jewelry to source the raw material once he was back in India.

But at the end, he was able to make the perfect product - a coating solution that's eco-friendly and hazard-free.

Next problem he faced was that he didn't have any experience in sales, marketing or distribution. As he was uneducated, no one trusted him or the product.

After six months of struggle, he found Kranti Anand and Saransh Anand (the other two founders in the tank). They helped him get marketing and distribution support.

With their help, he was able to find his first client for ARR Coat - none other than Gauri Khan - King Khan's wife, who herself is an interior designer.

That's how the product took off. Today, ARR Coat is sold through Concept Kreation (an interior company founded by Kranti & Saransh Anand).

On the discussion around Concept Kreation, Anupam got curious and asked about the equity structure (for ARR Coat).

Anand informed that he has 100% ownership of the company and 30% of the profit share is given to Ekbal as the ideator and inventor.

Anupam counter questioned that why Ekbal doesn't have any equity in the company when the idea, concept, innovation, execution, manufacturing, everything was done by him.

Aman also said that its not fair to keep Ekbal out of the equation and commented that if Anand was a fair businessman, he would have given him the deserved equity (along with the profits).

The sharks further asked about the sales figures for ARR coat.

Ashneer commented that though the product is superior, he felt that it is a super-premium product with a limited market segment. So he would stay out.

Namita also said that she doesn't have any expertise in the segment so she will also stay out.

Aman felt that the business wasn't investible in any way and got out too.

Peyush commented that there are two businesses - one of interiors (Concept Kreation) and other of paints (ARR Coat). This is not feeling right somehow. He'd be a customer but not an investor and he got out.

Anupam got interested in the product and floated an offer.

Offer 1: Anupam Mittal agreed to give an offer to ARR Coat with a lot of conditions.

On a counter offer by the founders (50L for 15%), Anupam Mittal agreed to invest in the company.

Farda Clothing is a hip and casual clothing brand founded by a young team from Nagpur. The brand aims to become a truly-Indian hip streetwear brand and sells clothing with custom creative designs and unique materials.

Customization is Farda's biggest differentiator. They're focused on Sustainable fashion and incorporate Indian art forms to create truly Indian streetwear (inspired by the art of India). They do hand-painted fashion products like jackets, tees, dresses, etc.

Farda in Urdu means tomorrow and the team behind Farda wishes to become the clothing brand for the young minds of tomorrow.

Discussion: Did Farda Clothing Get Funding from the Sharks at Shark Tank India

The sharks asked about the sales of Farda Clothing.

The founders informed that their main sales channel currently is Instagram and its been 4 months since they started. Since inception, they've registered 1.3L in sales as an early stage startup.

Aman asked if their brand would become a niche streetwear brand or a mass-market brand. They informed that they're focusing on both the aspects. They're really trying to scale up manufacturing and right now manufacturing everything from Nagpur.

Ashneer felt that the founding team is young and is attracted to the glitz and glamor of the 'startup' and 'fashion' industry, and not particularly the business side. So, he got out.

Peyush said that he has no interest in apparels and fashion and got out.

Aman asks more about their plans to sell, future roadmap, and also doubted the young age of the founders (if they'd really be able to scale up well).

But in the end, he moved together with Namita to give a combined offer. They both said that there is lot of work to do and will take a lot of their time to make Farda a success and gave a steep offer.

Anupam felt that Namita & Aman gave them a better offer, so he stayed quiet and didn't offer anything.

Got: 30L for 20% from Aman and Namita after a bit of reality show drama.

What do you think about the pitches on Episode 11? Was Gopal's 56 really justified in such a steep ask? Do you like Farda's interesting clothing line and would order from them? Let us know in comments section.

Check Out Deals, Information & Brands from Other Episodes 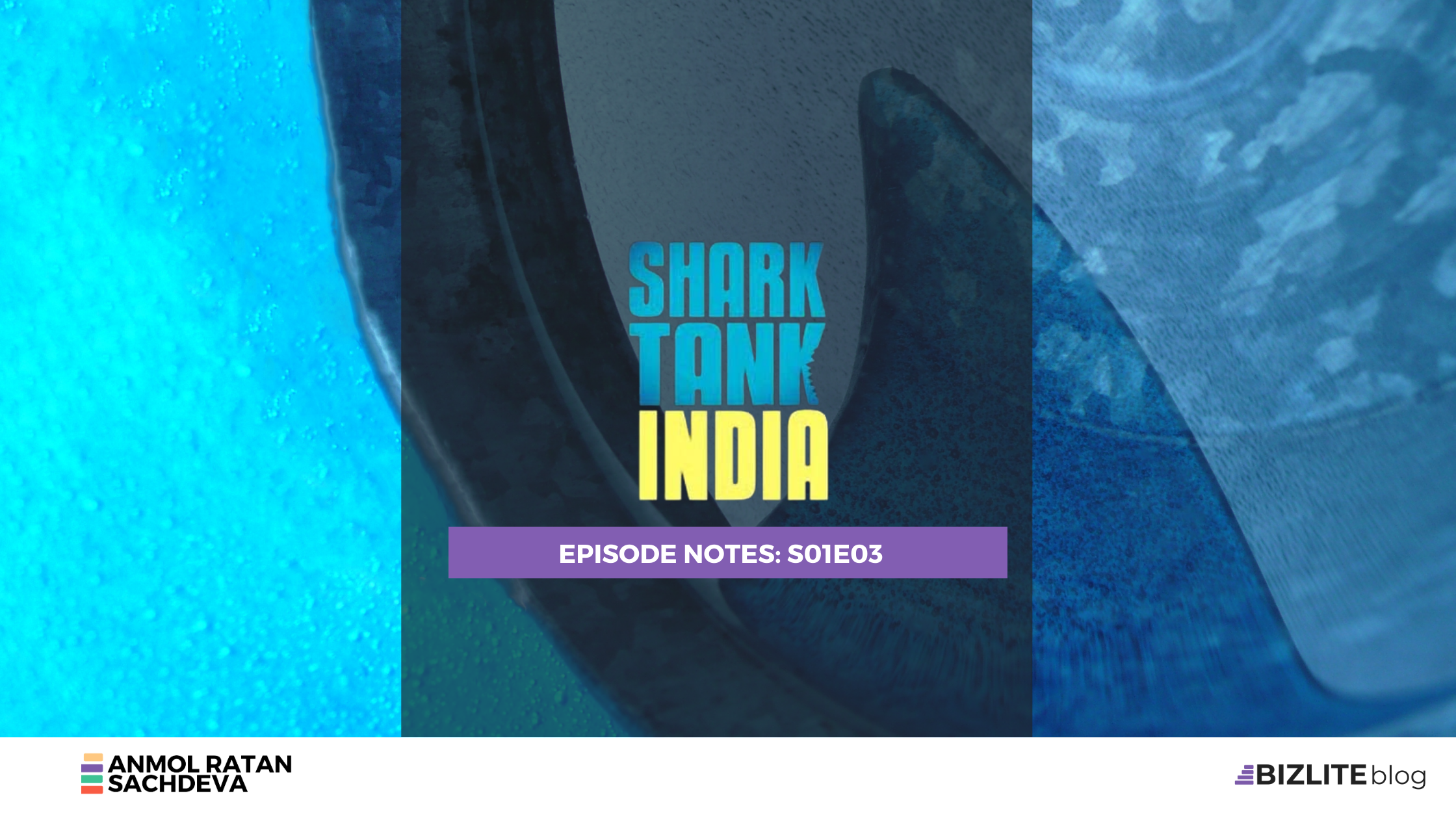 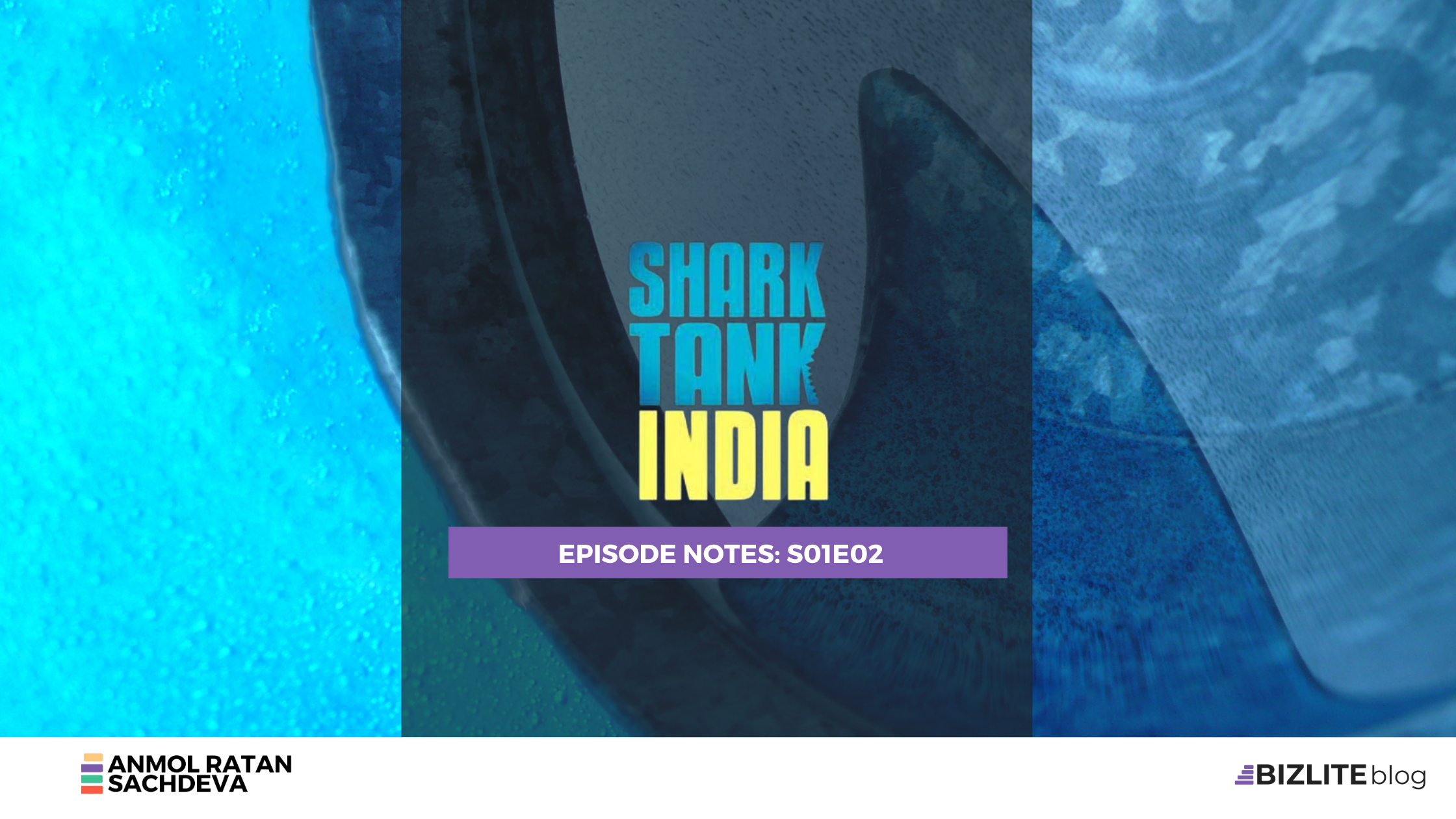 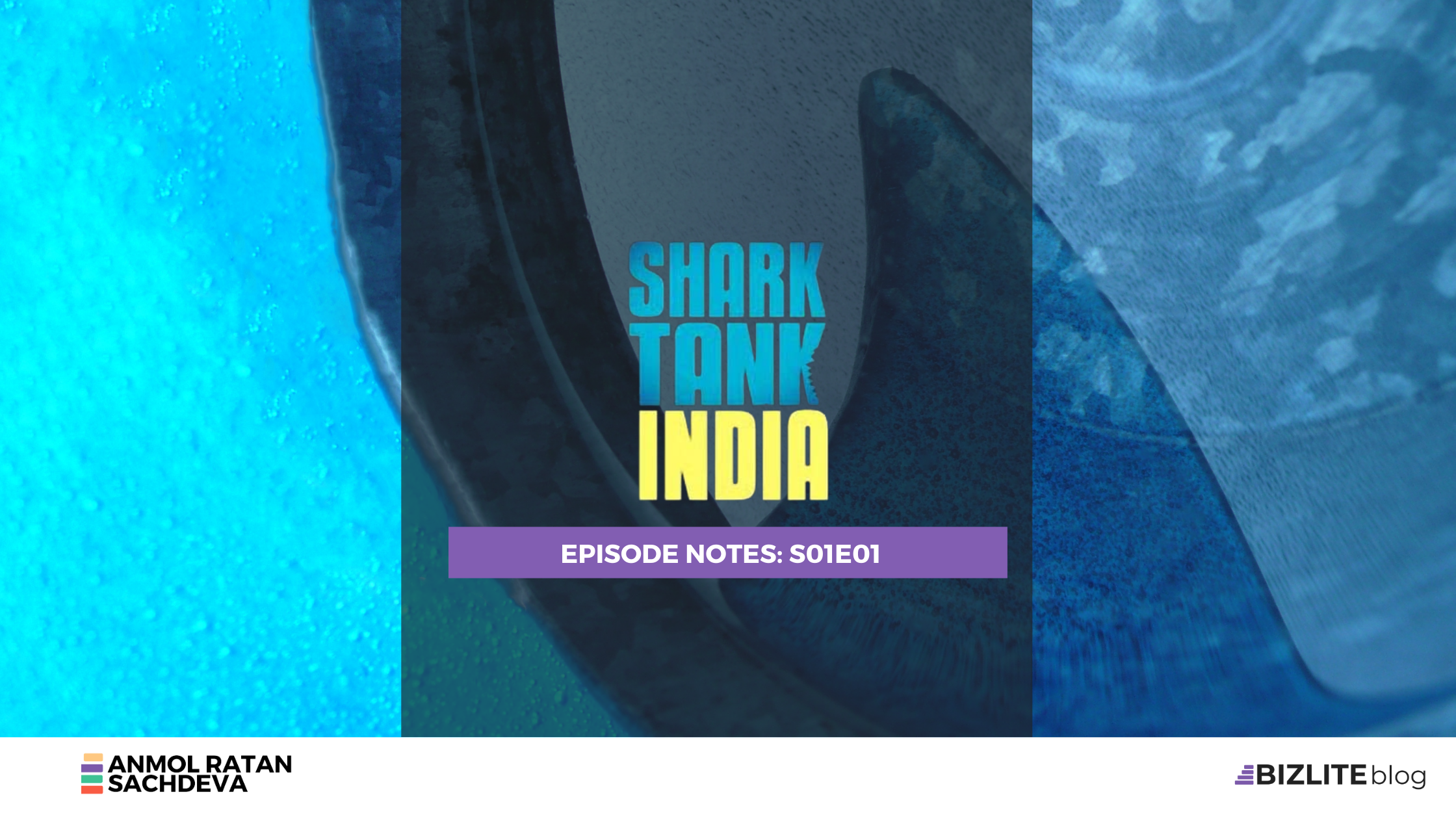 Shark Tank India's first episode finally got live at 9:00 pm on a Monday night in India. While many…